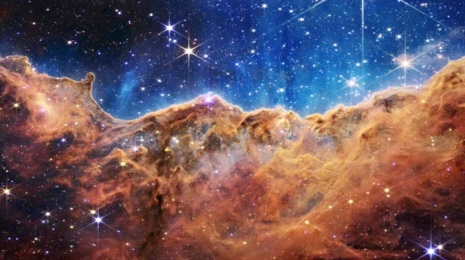 Two different things worked together to bring elegance to my life this week ~ images from the James Webb Space Telescope and a poem by the United States’ newest Poet Laureate, Ada Limón.

The James Webb Space Telescope sent us celestial images I can only describe as poetry in motion. It’s impossible for me to fathom a 10 billion dollar satellite taking photos from one million miles away. According to NASA, the very faintest blips of light in the photos are of galaxies as they existed more than 13 billion years ago. The images confirmed for me that we are part of an incomprehensibly elegant universe.

In the poem, Limón contemplates what amazing creations we are. She believes that in the midst of our ordinary lives, we have the potential to do big things for each other and for our planet. You might even call it everyday elegance.

We point at the stars that make
Orion as we take out the trash,
the rolling containers a song of suburban thunder.

It’s almost romantic as we adjust the
waxy blue recycling bin until you say,
Man, we should really learn some new constellations.

But mostly we’re forgetting we’re
dead stars too, my mouth is full
of dust and I wish to reclaim the rising –

To lean in the spotlight of streetlight
with you, toward
what’s larger within us,
how we were born.

Look we’re not unspectacular things,
We’ve come this far, survived this much.

What would happen if we decided to survive more?
To love harder?

What if we stood up with our synapses and flesh and said,
No. No, to the rising tides.
Stood for the many mute mouths of the sea, of the land?

What would happen if we used our bodies to bargain
for the safety of others, for earth,
if we declared a clean night,
if we stopped being terrified,
if we launched our demands into the sky,
made ourselves so big
people could point to us with the arrows
they make in their minds

rolling their trash bins out,
after all of this is over?

I urge you to read the poem more than once and think about what our Poet Laureate is asking us to do. As we try to comprehend those spectacular photos sent to us by the James Webb Telescope, let’s consider our human potential and be inspired to shine a little brighter. §

Hi! I'm Alicia. As a retired language arts teacher, I believe beautiful literature can inspire good cheer and make the world a better place. I hope my simple essays, stories, and poetry brighten your day! Look for new posts on Wednesday and Sunday mornings. Subscribe via email by clicking the "Follow" button on the homepage at www.thesimpleswan.com. Alicia's Sunday posts appear in a newspaper column in the weekend edition of the Southern Illinoisan. Email her at Alicia@thesimpleswan.com. View all posts by thesimpleswan.com

Welcome to The Simple Swan